DD Girnar Time Table For Std 3 To 12 Gujarat Students : Moral education can include the sanctity of human character and the development of his personality, the process of healing physically, mentally and spiritually, the quest to integrate culture and science, as well as the process of freeing man from fear, inertia and ignorance. True education is the name of the harmonious combination of science and ethics.The education system should be such that it removes all kinds of obstacles and prepares man for his responsibility with the best intelligence and self-esteem. The intellect of man today is ten. 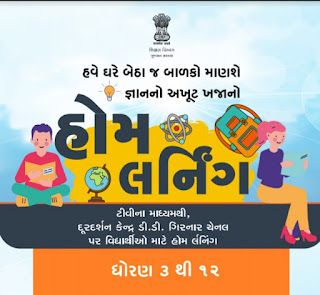 The telecast of educational programmes will cover students between classes three and 12, stated an official release. Apart from this, similar programmes will be run by the Bhaskaracharya Institute for Space Applications and Geoinformatics (BISAG) on the Vande Gujarat channel.

Gujarat state Textbook Mandal was established in AD 1969 on 21st October. Since the 38-year manuals main target. top quality textbooks are published and to Gujarat students, they’re easily available at reasonable prices.
In March, just before the lockdown was first announced, the state education department had roped in around nine private channels and Doordarshan to beam classes into homes for all government schools, under the Study From Home (SFW) initiative. Nearly 66 per cent students from government schools were covered by the SFW.
Under the initiative which will mark the beginning of formal schooling in Gujarat this year, arrangements have also been made to provide printed worksheets to students of classes one-eight who do not have mobiles or televisions, the release added. Apart from this, teachers are also distributing books to children at their homes, said the statement from the government.
IMPORTANT LINK: