Modi government’s big announcement: Corona treatment will be free if there is a scheme, know that millions of rupees will be saved.

For people who are living below poverty line & lower income group, an illness not only represents a permanent threat to their income and earning capacity, but in many cases it results in the family falling into a trap of debt. When need to get treatment arises for a poor family they often ignore it because of lack of resources, fearing loss of wages, or they wait till the last moment when it is too late. Health and poverty are interwoven. These families are pushed into a vicious debt poverty cycle due to excessive expenditures arising out of catastrophic health shocks.

To address this key vulnerability faced by the BPL population in the Gujarat, Mukhyamantri Amrutam “MA” Yojana was launched on 4th September, 2012 by Government of Gujarat.

When in the Lower middle class families, critical illness occur and when such families are not included in the definition of BPL so they cannot get free treatment, and they are not able to spend money for critical illness. So, Based on feedback from various stakeholders, the Scheme was extended to families of lower income group names as Mukhyamantri Amrutam Vatsalya Yojana in August 2014.

Some of the notable features of Mukhyamantri Amrutum Yojana can be given as follows:

This scheme offers a sum insured amount of Rs.3 lakh on a floater basis

Five members of a family can avail the benefits under the scheme.

There is no cost incurred by beneficiaries as this is a 100% government funded scheme.

A quick response coded card (QR coded card) is issued to families that avail coverage under this scheme.

Since this is not an insurance policy, there are no intermediaries involved in the coverage process.The state government transfers the benefit amount through RTGS

The claim is settled on a paperless basis to make the claim settlement faster.

The network hospitals empanelled under this scheme include private hospitals, government hospitals, and standalone dialysis centers.

There is no specific time frame for beneficiary enrollment, and people can sign up for this cover anytime of the year.

Civic Centre kiosks and Taluka kiosks have been set up for the beneficiaries so that they can enrol themselves or make any additions or deletions under the scheme.

Mega health camps and General Health camps are set up by public and private empanelled hospitals. 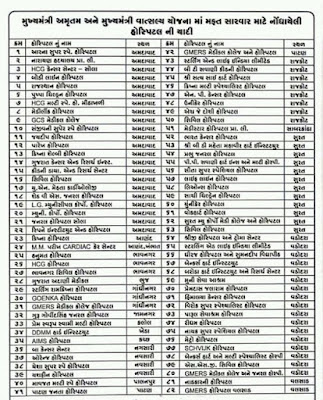 Apart from families below the poverty line and low income families, a few more beneficiaries were included in the scheme. Here are the new additions to the scheme:

In 2016, U-win card holders were also permitted to avail the benefits under the scheme.

In the FY 2017-18, fixed pay state government employees of Class 3 and Class 4, reporters, and rural as well as urban Accredited Social Health Activists (ASHAs) were added as beneficiaries.

Senior citizens whose families’ income is within Rs.6 lakh are also included.

The following eligibility criteria must be met in order to get benefits under Mukhyamantri Amrutum Yojana:

The total annual income of the beneficiary must be less than Rs.2.5 lakh.

It is a must to have an income certificate before subscribing to this scheme.

This cover can be taken for self, spouse, and three dependent children.