So it is necessary to link your ration card with Aadhaar before September 30. મોટા Big news about ration card holders • Get the ration card linked to Aadhaar The link is only 12 days away. If the remaining ration card does not link to the Aadhaar card, your name will be removed from the ration card. 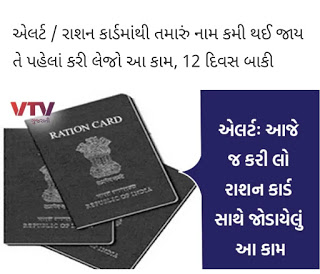 This requires those who have not yet done so to link to it before September 30th. The Central Government has issued an alert to the State Government regarding this rule. There are currently 23.5 crore ration card holders in the country. 90% of them have linked to Aadhaar and Pan. By September 30, with the help of Aadhaar Linked Ration Card, people can get food from fair price shops for less than the market price, depending on the public distribution system. Find out the 5 things you need to do to link ration card with Aadhaar. 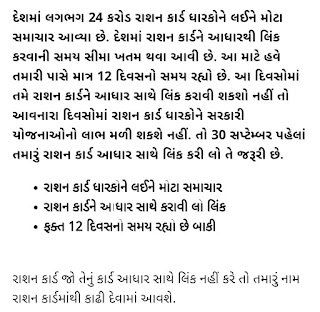 To link with Aadhaar, do this work. For this, submit a copy of ration card and a copy of Aadhaar card of each family member at PDS Center. • The passport size photo of the head of the family will be seen in the ration card. Data can be obtained by placing a finger on the biometric machine. The officer will match your details and base number. Your process will be considered complete when you receive the message of Aadhaar link from the ration card on the registered mobile number. .
If the ration card is not linked with Aadhaar, then the benefit of this service cannot be availed. The ambitious scheme of the Central Government, One Nation One Ration Card has 26 States and Union Territories. Portability service has been launched in these states. More than 81 crore people in the country are expected to join the scheme by March 2021. Half of the country’s population will benefit from joining the scheme. The Central Government is trying to ensure that every state in the country gets the benefit of One Nation One Ration Card Scheme by March 31, 2021.
Important Link:
|| Click Here To Read In Gujarati ||