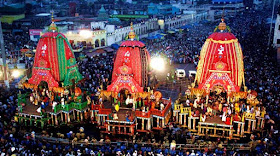 Jagannath Rath Yatra 2021
DURATION :
12/07/2020 – 12/07/2021
LOCATION :
Puri, Orissa
One of the most-awaited festivals in the Orissa state as well as in India, Jagannath Rath Yatra is an annual event, which is celebrated in the month of June or July. It is dedicated to Lord Jagannath (Lord Krishna), his sister Goddess Subhadra and his elder brother Lord Balabhadra. It is also called Gundicha Yatra, Chariot Festival, Dasavatara and Navadina Yatra.

CLICK HERE TO WATCH VTV NEWS LIVE TV
Why is Rath Yatra Celebrated?
Rath Yatra is organized in Puri. It is believed that every year Lord Jagannath wishes to visit his birthplace Mathura for a few days. To fulfill this desire of his, this Yatra is conducted each year from Jagannath temple to Gundicha temple.
Rath Yatra 2021
This year, the very popular Jagannath Rath Yatra will be held on June. The festival is celebrated on the 2nd day of the Shukla Paksha, Ashadh month according to the traditional Oriya Calendar.
Procession during Rath Yatra
The wooden idols of the three deities, every year, are taken from the Jagannath Temple to the Gundicha Temple. These idols are placed in decorative chariots, and are accompanied by chants and conches, which can be heard all around. Before the Yatra commences, the idols are bathed with 109 buckets of water, which is Snana Pornima. These are then placed in isolation till the day of procession, as it is believed that they are ill. This event is called Ansara. On the day of the procession, the holy ritual of Chhera Pahara is performed by the royal successor of Orissa. At this time, hordes of locals and devotees flock around the temple area.
During Chhera Pahara, the deities are brought from the temple by the King and are placed on the chariot. Before keeping them, the king himself sweeps the chariot with a broom that has a gold handle. He later decorates the chariot with flowers with his own hands. The ground on which the chariot will move is also cleaned by him, after which sandalwood is sprinkled on it.
Through this ritual, it is proposed that everyone is equal in the eyes of the Lord. Jagannath temple is accessible only by Hindus but on the day of the Rath Yatra, people of all faiths can visit the temple. The 3 deities remain at the Gundicha Temple, their aunt’s place for a span of 9 days. Later, they are back to their home. This return journey is called the ‘Bahuda Yatra’.
On reaching the Jagannath Temple in the evening, they wait outside. On the next day, the idols are adorned with new clothes as babies. This event is called Suna Vesa. After this day, the deities are placed again into the sanctum sanctorum, marking an end to the Rath Yatra of Jagannath Puri.
Ahmedabad Rathyatra live:-CLICK HERE
Puri Rathyatra Live:-CLICK HERE
CLICK HERE TO WATCH ABP ASMITA GUJARATI NEWS CHANNEL LIVE TELECAST
CLICK HERE TO WATCH VTV NEWS LIVE TV

The Chariots in Ratha Yatra
The prime attractions of the Rath Yatra of Jagannath is the elaborate Chariots. The preparation of the chariots starts on the day of Akshay Tritiya. There are 3 main chariots, pulled by hands using long ropes, which are 50 meters in length. It is believed that pulling this rope is like adding to your good Karma, and doing penance for your bad deeds.
45.6 feet in height, Lord Jagannath’s Chariot is called Nandighosa and has 18 wheels. The chariot of Lord Balaram’s is 45 feet in height, comes with 16 wheels and called Taladhvaja. Similarly, Devadalana is Goddess Subahdra’s chariot, which has 14 wheels and come with a height of 44.6 feet. Artists decorate these chariots in a beautiful manner with the help of designs, motifs and paints.
As the procession starts, the chariot of Lord Balram is pulled, followed of Goddess Subhadra and that of Lord Jagannath at last. The distance between the two temples is just 3 km but the whole enthusiasm of the tourists and the devotees clubbed with chants and drum beating, takes a few hours. For the next 9 days, devotees can seek blessings of the Lords and the Goddess.
During the return Yatra, the Bahuda Yatra make a halt at the Mausi Maa Temple. Here the deities are served Poda Pitha, a sweet pancake. It is believed that this pancake is the poor man’s food and the Lord is fond of it.
Jagannath Rath Yatra or the Chariot festival is known to be one of the oldest and also the grandest procession festival, which is celebrated every year in India. It also finds its mention in Puranas of Hinduism such as Padma Puran, Brahma Puran and Skanda Puran.
Places to visit near Jagannath temple
Puri is dotted with several attractions for its visitors. There are various beaches and temples here. Puri beach, Konark temple, Konark beach, Raghurajpur artist village, Chilika Lake, Sakshigopal temple, Pipili village, Shree Loknath temple and Gundicha Temple are some of the popular attractions near Jagannat temple, which must be visited.
How to Reach
By Air
The nearest airport to Puri is Biju Patnaik Airport, Bhubaneswar, which is around 60 km from Puri. The city is easily accessible from the airport. You can easily rent a cab. This airport is well-connected with important cities of the India such as Delhi, Nagpur, Mumbai, Kolkata, Hyderabad, Visakhapatnam and Chennai.
By Rail
Puri is the last stop on the East Coast Railway. It is connected through direct express and other super-fast trains with important Indian cities such as Okha, Delhi, Tirupati, Kolkata, Mumbai, Ahmedabad and so on.
By Road
Puri is easily connected with road through a good network of roads. From the bus stand near the Gundicha Temple, buses from Bhubaneswar and Cuttack are available after every 10-15 minutes. Mini buses for Konark are also available from here, after every 20-30 minutes. Direct buses for Kolkata and Visakhapatnam are also available. Renting a cab is another option.
HMEDABAD RATH YATRA 2020
The 140th rath yatra of Lord Jagannath on Sunday commenced in the city amid tight security as lakhs of devotees flocked the 15-km journey route to catch a glimpse of the deity. Gujarat Chief Minister Vijay Rupani and Deputy Chief Minister Nitin Patel performed ‘Pahind Vidhi’- a symbolic ritual of cleaning the way for the chariots.
The chariots of Lord Jagannath, his brother Balbhadra and sister Subhadra, then started the journey from the 400-year-old Jagannath Temple in Jamalpur area this morning. Before the rath yatra commenced, BJP president Amit Shah performed ‘mangla aarti’ of the deities in the temple during the early hours.
The procession comprises 18 elephants, 101 trucks, seven cars, members of 30 ‘akhadas’ and 18 bhajan mandalis. It is taken out every year on ‘Ashadhi Bij’, the second day of Ashad month, as per the Hindu calender.
The procession will move through some communally sensitive areas like Jamalpur, Kalupur, Shahpur and Dariyapur. To thwart any untoward incident during the rath yatra, over 20,000 police and paramilitary personnel as well as NSG commandos have been deployed along the route.
CLICK HERE TO WATCH VTV NEWS LIVE TV

For the first time, a company of National Security Guards (NSG) has been deployed to guard the yatra. The procession generally stretches upto 1.5 kms and winds its way through the 15-km route in the walled city before returning to the Jagannath Temple after about 12 hours