The Gujarat High Court has directed a lockdown following the increase in Corona cases across the state. The state has observed the need for a 2-3-day weekend curfew in the state.

3160 new cases were registered in Gujarat

What did the High Court point out?

Pointed out to stop political gains

Strict adherence to the rules of Kovid

Corona’s condition is getting worse in Gujarat 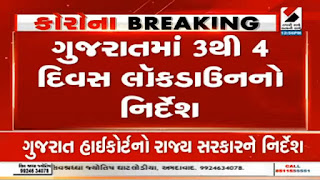 We also decided to take a decision on weekend curfew

An average of 3,000 cases are being registered in the state every day. While waiting for RT-PCR is also going on in most of the laboratories. In view of all these conditions, a serious situation may be seen in Gujarat in the coming days due to Corona.

Importantly, night curfew has been imposed in 4 metros of the state at present. Which is applicable from 9pm to 6am. So there is a possibility that the state government may consider a weekend curfew in the metros in the coming days.