Government’s decision to recruit directly to the posts of Cadre-2 by the Home Department’s Recruitment Board.

From non-armed PSIs, many recruitments are handed over to the Home Department instead of secondary services.  Have been doing enough agitation.  In those circumstances, the decision to extend the term of jurisdiction issued by the General Administration Department on the condition of keeping it in the Gujarat Secondary Service Selection Board states that the Class-II has been made technical. 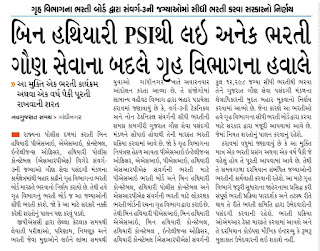