Government’s Decision: Navratri will not be held in Gujarat this year, the government canceled the Navratri festival

A dilemma has been raging for some time over whether Navratri will be celebrated in the state amid the Koro epidemic. Today, Chief Minister Vijay Rupani has decided not to celebrate the state level Navratri festival to be held from October 17 to 25. 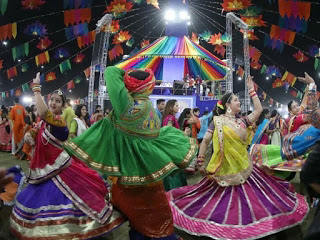 Nitin Patel said the government was thinking about Navratri
Uncertainty has prevailed over Navratri, the world’s longest-running dance festival due to the Koro epidemic. The state government has not yet taken any decision for the planning of Navratri starting from October 17 in Gujarat. though the leadership is irritating to formulate a resolution by philosophy at the fitting time. Speaking to reporters at a function in Rupal, Deputy Chief Minister Nitin Patel said, “Khelaiya is waiting for Navratri.” The government will consider this even when people are eager to play Navratri even among the corona. Gujarat’s Garba has a prominent personality in the planet but at a time what time nearby is a towering peril exactly to corona, it is crucial to bring to an end the transmission of halo in the state-owned, so the government will take a decision after considering all aspects. The government is considering giving concessions in Navratri as per the guideline of Covid 19.
Rasotsav will not be held by Rajkot’s largest Sahiyar and Sargam Club group
Two young Ras Garba administrators in the city recently announced the cancellation of planning this year due to the increasing number of Koro transitions in Rajkot. Rajkot has announced the cancellation of Navratri by the managers of Sahiyar and Sargam Group.
Garba of Gandhinagar Cultural Forum canceled
Navratri of Gandhinagar Cultural Forum, whose name is known all over Gujarat, will not be held. Announcing this a few days back, Krishnakant Jaha, Chairman, Gandhinagar Cultural Forum, said that the transition to corona is still going on and strict adherence to social discrimination is essential in the years to come. In such circumstances, the safety of the citizens is our priority and that is why Gandhinagar Cultural Forum has decided not to hold Navratri Festival this year.
Important links
CLICK HERE TO VIEW NEWS REPORT IN GUJRATI